The Outsport project is the first initiative at European level to gather scientific evidence about discrimination based on sexual orientation and gender identity in sport, and to set itself the ambitious aim of enhancing the impact of sports as a tool to tackle discrimination.

The project seeks to address homophobia, biphobia, transphobia, and interphobia in sport through communication, awareness raising, training, and scientific research.

Outsport is co-funded by the European Commission through the Erasmus Plus program and involves five European countries: Italy, Scotland, Germany, Austria, and Hungary.

The German Sport University Cologne is leading the scientific research part of the project. You can download the full report of the findings of the first part of the research here.

Foster capacity-building and education against intolerance and discrimination for coaches and staff of the organisation by developing a training toolkit for sport operators to promote an innovative approach to tackle hate crime and discrimination based on sexual orientation and gender identity in sport.

Promote sport itself as a tool for the prevention of discrimination, bullying and hate-crime based on sexual orientation and gender identity.

Developing and proposing new guidelines concerning LGBTI rights into the next EU Work Plan for Sport, which shall be based on the principles of the EU Gender Equality Strategy and the other legal basis of the EU. 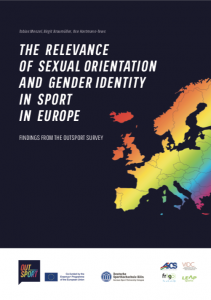 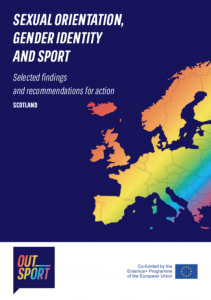 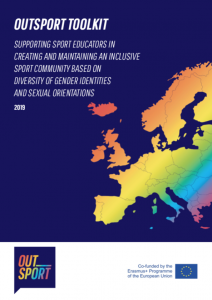 1) The Final Report on the EU-wide research on the experience of LGBTI people in sport, coordinated by the German Sport University of Cologne. The report is now available for download here, and contains the aggregated data results at EU level – highlighting the differences regarding sexual orientation and gender identity between the five project countries (Italy, Germany, Scotland, Hungary and Austria) as well as all the other EU member states.

The report illustrates a rich and wide perspective of anti-LGBTI attitudes in sport, including different sport disciplines and environments, as lived and perceived by LGBTI people. More than 5,500 lesbian, gay, bisexual, transgender and intersex (LGBTI) people from all 28 EU countries completed the online survey.

An additional report detailing findings specific to the research conducted in Scotland – including interviews with representatives from sportscotland, Scottish Disability Sport, Scottish Student Sport, and Community Leisure Scotland – is available for download here.

Some key findings include:

Based on these survey findings, umbrella organisations and federations from the 5 projects countries were interviewed about their strategies in tackling homo-/transphobic discrimination in the field of sport. That data has in turn been used to produce 5 specific focus booklets for each partner country (Austria, Germany, Hungary, Italy, Scotland), containing local highlights and recommendations specific to their national contexts (these booklets are available here).

2) A pedagogical toolkit to address LGBTI inclusion in and through sport. Outsport aims to promote a new inclusive training approach: apart from contrasting homophobia and transphobia in sport, Outsport strives to make sport a tool to educate against any form of exclusion and a space in which social competencies can be developed in continuity with schools and other educators. On this front, the second main outcome is the publication of the Training Toolkit, a manual for those working in sport and education with exercises and practices tested during the project and based on the Non-Formal Education through Sport methodology (moveandlearn.org).

All partner organizations agreed on the importance of introducing a specific focus in the next European Work Plan for Sport – contrasting homo-transphobia and gender stereotypes. This would also enhance debate on gender equality.

In accordance with the first guiding objective of the current EU Work Plan for Sport – “to ensure, through cross-sectoral cooperation, the awareness of other EU policy domains of the contribution that sport can make in meeting the policy challenges facing the EU” – project partners recommend the Working Party on Sport of the Council of the European Union.

Outsport coordinator, Rosario Coco commented: “After the project results, these recommendations are a key political challenge in order to produce a concrete impact on European sport policies from grassroots to professional levels”. 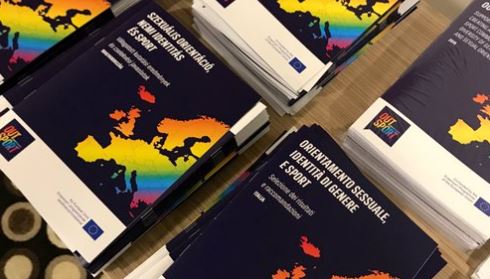 The partners finally agreed on the importance of giving continuity to the work on this topic, including developing follow-up objectives and strategies building on the research conducted over the course of the project.

For this reason, it was considered especially important to focus on developing the research and scientific aspect of the Outsport project, in order to deepen our knowledge and understanding of discrimination based on gender identity and sexual orientation in sport across Europe and to obtain a dynamic image of the phenomenon, as it evolves and changes and as policies impact it.

The training toolkit, research booklets in each partner country’s main language, pictures and other material from the final conference are available on our website, here. You can also find the complete research report here.